THE BALLAD OF PHINEAS MCBOOF is based on the popular Doctor Noize children’s book of the same title, and features original songs that have been previously recorded and performed live as part of the nationally acclaimed Doctor Noize Concert Series. The new musical tells the story of Phineas McBoof, the great rock star monkey from the Isle of Thelonious, who has become so popular he can no longer hear himself perform over the screaming fans at his concerts. One night, he leaves fame and fortune behind to refocus on his true passion — music. He hops on a rowboat with his guitar and launches a journey that introduces him to a much larger world of music than even he imagined. Along the way, he meets a colorful cast of creative creatures. Together, they form a new band: The International Band of Misunderstood Geniuses.

The orchestration of the new musical will inspire a curiosity about instruments and music in young audiences.  Band members — each representing an instrument — are introduced one by one to teach the sounds of the instruments. Audiences hear the orchestration grow with the story. Phineas and his band, the International Band of Misunderstood Geniuses, all have one thing in common: they follow their own muse. They are driven by creativity, curiosity and character, and will inspire audiences to seek adventures of their own. 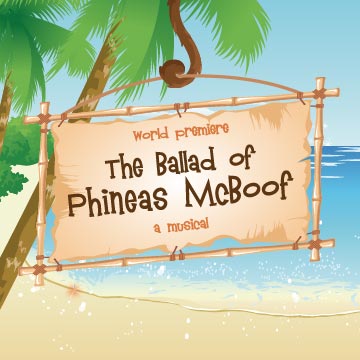 Additional (Optional) Items:
Rehearsal CD (with vocal parts): $35
Performance CD (instrumental only): $75
Permission to film/record production for archival or non-commercial use: $150
*With purchase of permission, this grants Producer permission to distribute one physical copy to each member of the cast or production, with no additional or electronic distribution allowed.

Audio samples:
Banana
Carry On
I'm With the Band
The Ballad of Phineas McBoof